As a radical design, the Moulton bicycle - the first small-wheeled adult bicycle - needed credibility in the market and Alex Moulton realised the importance of this when planning the launch of the bicycle in 1962. Aided by his Marketing Manager David Duffield, himself a record-breaking cyclist, several riders were actively supported by Moulton. Coventry CC pursuit team were unstoppable on the track, their Moultons allowing them to keep in a tight group to reduce aerodynamic drag; road riders benefited from the reduced aerodynamic drag of the small wheels and, with reputation established, the Moulton became acceptable to the most discerning club cyclists. Following the introduction of the UCI (Union Cycliste Internationale) rule 1.3.018, Moultons are not permitted in road-racing events - this is why you never see them in events like the Tour de France - but they are still used in time-trials and for ultra-distance events.

Below are details of the most notable achievements by Moulton riders over the last 50 years...

1962 - only a month after the Moulton was launched, John Woodburn spectacularly broke the Cardiff to London record on a Moulton 'Speed', covering 162 miles at an average speed of 24 miles per hour. This feat immediately established the Moulton as a serious bicycle amongst the public, the press and the cycling community.

1963 - a four-man pursuit team, riding Moultons at The Butts track in Coventry, catch their opposition and break the club record.

1963 - One of Britain's cycling greats, the late Tom Simpson, test rode the Moulton Speed at Herne Hill in London. He was so impressed by the bike that he stated he would be pleased to race on the small-wheeler 'next week' were he not already under contract to Peugeot.

1978 - Daved Sanders completes the Paris-Harrogate 800km Centenary Ride in only 51hrs. Daved was one of only 32 finishers from an entry of 108. 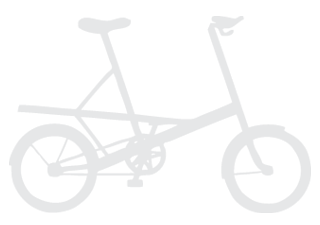 1984 - Elgar Vaivars wins Toronto Criterium on AM7 taking full advantage of the superior cornering capabilities of the Moulton.

1985-1986 - In the Autumn of 1985, at the International Human Powered Speed Championships, a fully-faired Moulton ridden by Jim Glover broke the 200 metres flying start speed record, at 50.21mph (80.79kph). Then on August 29th 1986, at the same event, he broke his own record at a speed of 51.29mph (82.54kph) which still stands today for the conventional riding position. The Moulton ridden was an AM SPEED with the fairing designed by Doug Milliken of Buffalo, NY.

1989- Richard Grisgby of the Bath Cycling Club, riding an AM SPEED, came first out of 180 in the 1990 Fowey Triathlon in Cornwall. He also came third in the cycling split of the Kingswood Triathlon out of some 400 competitors and was only 9 seconds behind a 1st category roadman. 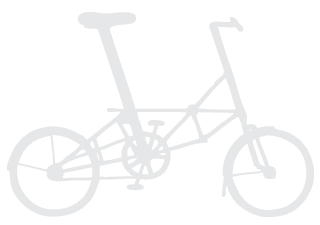 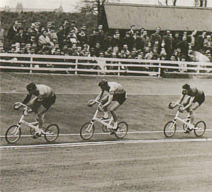 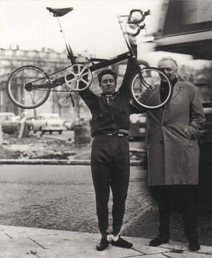 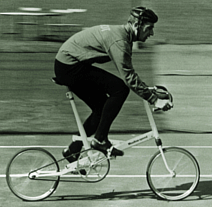 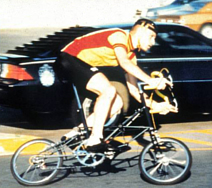 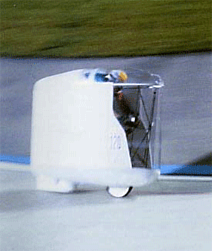 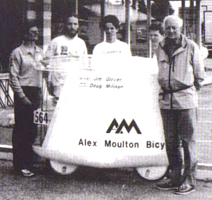 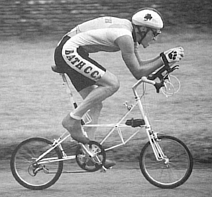 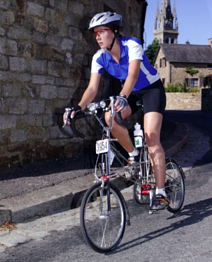 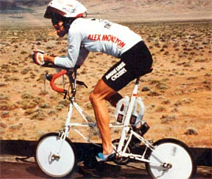 From the beginning the Moulton Bicycle has been widely acclaimed as the best touring bicycle in the world. Its design has ample capacity for carrying and the low centre of gravity and suspension make it stable at high speed even when fully loaded.

The immensely strong compact wheels are far longer lasting than conventional wheels, and their small size means that spare tyres and tubes take up less room. Frame separation is an extremely useful feature, making the Moulton easy to put on buses and trains, or secure in a hotel room.

Above all, however, it is the comfort, efficiency and secure handling of the Moulton which make it a pleasure to ride, particularly on long journeys.

The Moulton bicycle has been used for many awe-inspiring cycling adventures... 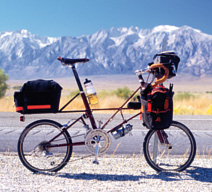 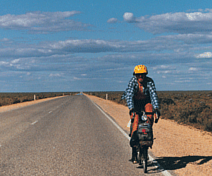 "the best touring bicycle in the world"

In 1970, the Moulton Marathon, one of the MK3 prototypes, was ridden by Colin Martin from Wiltshire, England to Kalgoorlie, Western Australia. Only four Marathons were made. Colin's was sadly stolen in Australia, terminating what was intended to be a round-the- world-tour. Whilst waiting for a replacement to be built and sent out to him, he met his future wife and chose to settle in Australia. In 2002 he continued his tour on a New Series Moulton, riding from Vancouver to Bradford-on-Avon, and in 2008 he finally completed his epic journey in Australia.

To learn more of Colin's epic adventures on his Moulton, visit:

Before Ron got his AM7 Moulton he was a leisurely tourist quite content with 100km in a day. But he found "this lovely machine was so responsive, so compliant, that I was soon doing 200km and 400km Audax rides in comfort and enjoying the experience enormously". 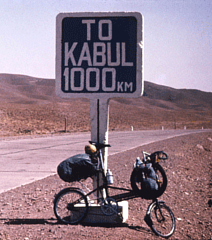 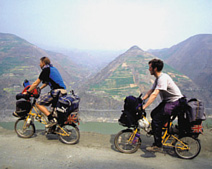 Ben and Oliver riding across China, 1997

Cambridge graduates, Ben Steele, Oliver Matthew and Baz Bix, chose Moulton APBs to ride across Mongolia and China following in the tracks of a 1874 Russian Research and Trading Expedition.

Setting off from Ulan Ude in Russia, they encountered extremes of climate and terrain conditions passing through the sands of the Gobi desert and heights of the Tibetan plateau. They arrived in Zaisang on the China/Kazakhstan border, after travelling an amazing and eventful 6000 miles (9650 km).

BBC journalist, Steve Jackson, rode a Moulton APB from 'End-to-End' of New Zealand (Bluff to Cape Reinga) in 2002, covering 1800 miles (2900 km). The tour took four weeks and included the punishing road to Milford Sound, and the mighty Crown Range Road - at 3,670', the highest road in New Zealand. As well as the excellent ride comfort, Steve found the Moulton separability ideal when transporting the bike in small aircraft. 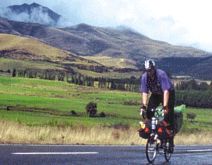